A team of German and Kurdish archaeologists discovered a palace of approximately 3,400 years that belonged to the mysterious Mitani Empire, the University of Tübingen, Germany, announced on Thursday (27/06). 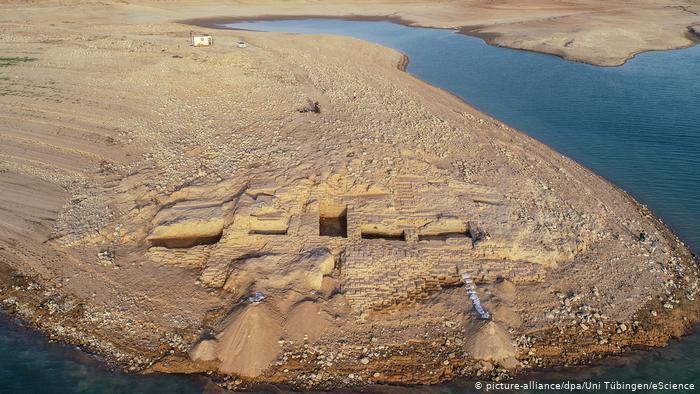 The discovery was made possible only by a drought that significantly reduced water levels in the reservoir at Mossul Dam, in northern Iraq. The Mossul dam, which holds the waters of the Tigris River, is the largest dam in Iraq – and the fourth largest in the Middle East – and aims to generate hydropower and provide irrigation water on the plateau.

"It is one of the region's most important archaeological discoveries in recent decades and illustrates the success of Kurdish-German cooperation," said Hasan Ahmed Qasim, a Kurdish archaeologist at the Duhok Antiquities Board who participated in the work. The town of Duhok lies north of the dam, while Mossul is located to the south.

Last year, the team of archaeologists began an emergency rescue evacuation of the ruins when the backwaters revealed the monument on the banks of the Tigris River. The ruins are part of only a handful discovered of the Mitani Empire.

"The Mitani Empire is one of the least researched empires in the ancient Near Eas[termo usado por arqueólogos para se referir à região que engloba a Anatólia, o Levante, o Egito, a Mesopotâmia e, ocasionalmente, o Transcaucásia]t," said archaeologist Ivana Puljiz of the University of Tübingen. "Even the capital of the Mitani Empire has never been identified."

The team had little time to spare while the water levels rose again, eventually submerging the ruins again. At least ten cuneiform tablets of clay were discovered inside the palace.

"We also find remnants of wall paints in bright shades of red and blue," Puljiz said. "In the second millennium BCE, murals were probably a typical feature of palaces in the Near East, but we rarely find them preserved. Discovering wall paintings in Kemune i[local da descoberta]s an archaeological sensation. "

A team of researchers in Germany will now try to interpret the cuneiform tablets. They expect the pieces of clay to reveal more about the Mitani Empire, a kingdom of the Hurrian people that came to dominate parts of what is now southeastern Turkey, north-east Syria and northern Iraq.