The Great Pyramid of Giza continues to surprise experts every single day.

The Great Pyramid of Giza is considered the oldest and largest of the three main pyramids at the Giza Plateau and is the oldest of the Seven Wonders of the ancient world, and the only one that remains standing today.

It was the tallest man-made structure on the surface of the planet for more than 3,800 years and was covered by white limestone that formed a smooth shiny surface.

Everything we know about the great pyramid is based on studies from different scholars that have researchers this ancient wonder of the world since time immemorial.

And while we know a great number of details about the structure, many other facts continue to elude experts.

Last years, the Great Pyramid of Giza made headlines after the ScanPyramids project, using muon tomography detected a massive, never-before-seen void inside the structure, located above the Pyramids So-called Grand Gallery.

It was a huge and exciting discovery, which raised new questions about the interior of the pyramid.

Is this the only secret chamber? Are there more? What was its purpose?

Dubbed by experts as the ‘Big Void’, it was the first chamber of this sort found since the 1800’s, but most importantly, it is considered the first and ONLY chamber of its type.

But is this mysterious area inside the pyramid really a hidden chamber? Or is there perhaps a different explanation?

According to Egyptologist, Dr. David Lightbody this mysterious chamber may not be a chamber after all. 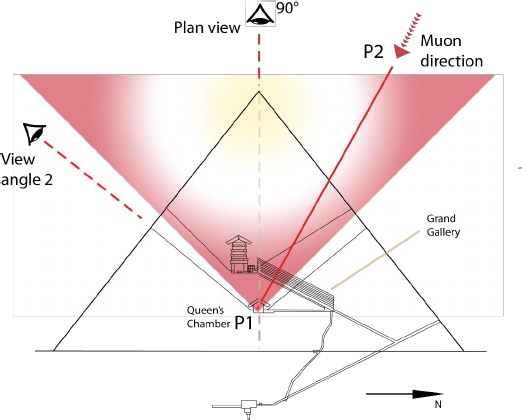 The solid red line shows plane 63.5 degrees to the horizontal, sloping to true north and running from P1 to P2. The inverted red triangle represents the zone covered by the Nagoya muon detection plates near P1. Image Credit

According to Dr. Lightbody, “Geometric calculations illustrated below… indicate that the new features on the scans which were interpreted as produced by a single ‘big’ void viewed from two directions, located 40m out towards the north face of the structure, could in fact have been produced by two smaller void zones closer to the center of the pyramid, one on either side of the Grand Gallery structure. Due to the offsets of the two Nagoya nuclear emulsion detection plates from the center line of the Grand Gallery, which were of a similar magnitude (NE2 – 4 m west, and NE1 – 5.5 m east of the N-S center line), and the inward slope of the sides of the Grand Gallery structure, only one such void zone would be clearly visible on each Nagoya scan.”

“On one side the small voids would be aligned with the detector and would form a zone that was almost a continuous void directed at the plate. On the other hand, the opposing void zone signals would not align with the detector and so the effect of the signals would not be cumulative. In addition, most of them would be hidden behind the signal of the main gallery structure.”

It’s noteworthy to mention that Dr. Lightbody has proposed just another theory and does not directly claim to have disproven the original explanation as to what the mysterious void is.

He offers an alternative view on the original find.

According to Dr. Lightbody, the ‘Big Void’ inside the pyramid revolves around a structural problem intrinsic to the pyramid’s construction.

As noted by the expert, the Grand Gallery slopes upwards at a steep angle, and it’s extremely difficult to cut blocks with two inclined faces while properly securing them in an unfinished structure.

So how could the ancient builders have resolved this issue? One way is to leave ‘voids’ inside the Great Pyramid.

The ancient builders of the Pyramid may have poured either sand or some kind of mortar inside the voids, and this material most likely was not picked up during the Moun tomography, which is why it appears as an empty space.

Dr. Lightbody argues that certain structures inside the Pyramid, like the Great Gallery and the King’s Chamber, may have been designed by the ancient architects as self-supporting structures, created outside the pyramid, before being transported and eventually assembled within the Pyramid.

If this is the case, then we could explain the existence of voids as artifacts of the Pyramids assembly process, and not empty chambers.

Dr. Lightbody concludes that “The Scan Pyramids project must be applauded for their progress so far, and more experimental work of this type is required at Giza. Ultimately, however, the priority should be to understand the structures from the point of view of the ancient Egyptian builders and architects who created them.”