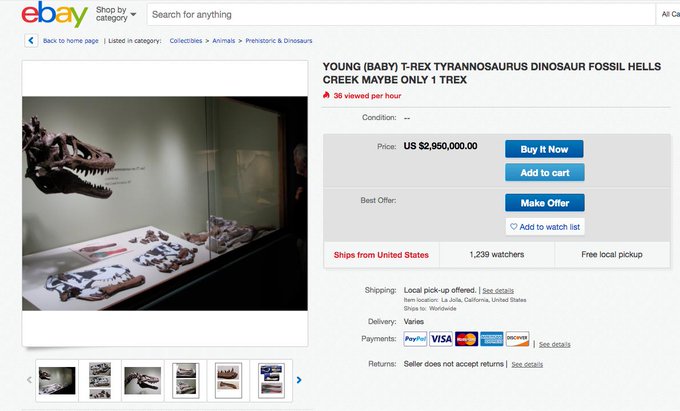 If you have the cash, you could buy an authentic baby T-rex fossil on eBay, much to the chagrin of paleontologists and scientists who want it to remain in the public trust.

In 2013, a professional fossil hunter from Kansas, Alan Detrich found a fossil of a baby Tyrannosaurus rex at Hell Creek Formation near Jordan, Montana. The fossil, which he claims may be one-of-a-kind, was discovered on leased land that Detrich used to search for fossils.

The eBay listing, which currently has over 4,600 people watching, proudly states:

“Most Likely the Only BABY T-Rex in the World! It has a 15 FOOT long Body and a 21″ SKULL with Serrated Teeth! This Rex was very a very dangerous meat eater. It’s a RARE opportunity indeed to ever see a baby REX, if they did not grow quickly they could not catch prey and would die. Histology shows the specimen to be approximately 4 years old upon death. Reconstruction of the skull has been done by Curator of Vertebrate Paleontology (from Natural History Museum in FL).”

Two years ago, the T-rex baby was on display at the University of Kansas Biodiversity Institute and Natural History Museum. Detrich loaned the rare find to the museum, but while it was still on display, he put it up for sale on eBay. This put the museum staff in an awkward position since they can’t ethically endorse or facilitate the sale of such fossils.

The director of the University of Kansas’ Biodiversity Institute, Leonard Krishtalka, put out a statement last week, explaining their predicament.

“Accordingly, the specimen on exhibit-loan to us has been removed from exhibit and is being returned to the owner. We have asked that the owner remove any association with us from his sale listing,” said Krishtalka.

The Institute asked Detrich to remove any mention of the museum in his eBay listing, which he apparently did. However, to date, the listing still mentions the Natural History Museum in FL.

CNBC noted that the Society of Vertebrate Paleontology (SVP) published an open letter raising “ethical concerns” about the sale of a baby T-rex on eBay.

“Its owner used the specimen’s scientific importance, including its exhibition status at KU, as part of his advertising strategy. Only casts and other replicas of vertebrate fossils should be traded, not the fossils themselves,” the SVP said.

“Because vertebrate fossils are rare, most of them contribute uniquely to our knowledge of the history of life. Each one that is lost from the public trust, is part of that already fragmentary history that we will never collectively recover,” the society added.

Detrich’s eBay listing under the name of “PirateGoldCoins” seems to have responded to such concerns, claiming that the finds like the T-rex fossil come about because private investors expect a return when they finance the search for rare treasures. The post suggests the fossil will be more accessible to the public if sold to a private collector rather than remain in a museum.

“Investors are willing to risk their money in hopes of finding these worldly treasures because there’s the possibility of some type of return, and (can’t forget) makes us feel in touch with the 10-year-old kid in all of us. We feel it’s MORE important for the World to be able to view and enjoy this (and all Artifacts) rather than a select view who can make it to the museum.”

“Also, most high-end collectors love to share their collection with the world (leasing to museums, etc) and welcome future research and the publication of that research. We want to share this important discovery with the Whole World!” states the eBay post.

Of course, it really depends on who has enough money laying around to spend several million dollars on a T-rex fossil in the first place.

If the sale is successful, it will set the stage for the private sale of irreplaceable fossils, which some scientists fear would undermine the process of studying and collectively appreciating past life as a society.

The T-rex remains a subject of intense fascination for millions. The American Museum of Natural History, which is celebrating 150 years, currently has a new exhibit on Tyrannosaurus Rex. Included in the exhibit is a fleshed out recreation of what the young baby T-rex may have looked like.