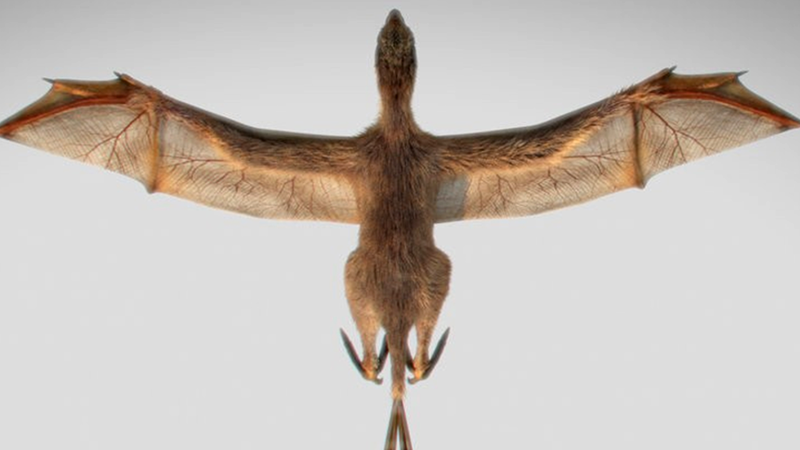 A team of Chinese researchers announced last Wednesday, May 8, the discovery of a species of dinosaur that had bat wings. The article containing the detailed study will be published in the journal Nature.

Called Ambopteryx longibrachium, the animal lived about 163 million years ago. His fossil was first seen by Chinese Academy of Sciences vertebrate paleontologist Min Wang last year. At first Wang thought it was some kind of bird.

The excavation at which the skeleton was found took place in Liaoning Province, China. Wang's team removed the find of rocks from the Jurassic era to continue the analysis.

After the fossil was completely removed from the rock, the group of paleontologists realized they were dealing with a Jurassic discovery. The first conclusion that the animal was a bird is due to the fact that many modern birds evolved from ancient dinosaur species.

The factor that set the difference between Ambopteryx and other bird species was its long fingers, which is common in the dinosaur family.

The new dinosaur is cousin of a similar species. Named Yi qi, which is the only other known animal that also has bat wings.

"If you had asked a paleontologist to design some kind of dinosaur fantasy, many of us would never have invented anything that was so strange," said Stephen Brusatte, Edinburgh University vertebrate paleontologist, who was not involved in the new research, in an interview with The New York Times.

Admittedly, bat-winged Jurassic-era animals existed. However, how they performed such flights is still a mystery to the researchers. According to the Chinese team, the best theory so far is that the flying style was "halfway between a flying squirrel and a bat."