Beneath Marcio Cabral’s entry, the British Natural History Museum detailed the arduous process the photographer said he went through to snap the award-winning picture.

He’d spent three years returning to the plains of Brazil, he told Wildlife Photographer of the Year judges, staking out giant termite mounds dotted with bioluminescent click beetle larvae — and waiting, monklike, for the perfect moment.

“After days of rain, Marcio was finally able to capture the phenomenon, but he also got a surprise bonus,” one caption said.

“Out of the darkness ambled a giant anteater, oblivious of Marcio in his hide, and began to attack the tall, concrete-mud mound with its powerful claws, after the termites living deep inside.”

And with a single click, Cabral was on his way to winning the museum’s 2017 photography award in the “Animals in their Environment” category.

He called the image of the anteater digging into the termite mound “The Night Raider”. Photographers and nature lovers marveled over his work. It was put in the museum’s exhibition and prepped for a tour of the winning artwork.

But a few anonymous third parties notified contest organizers that something wasn’t right.

The anteater in the photo hadn’t ambled out of any darkness in the recent past, they claimed. There was a reason the animal was “oblivious of Marcio in his hide.” 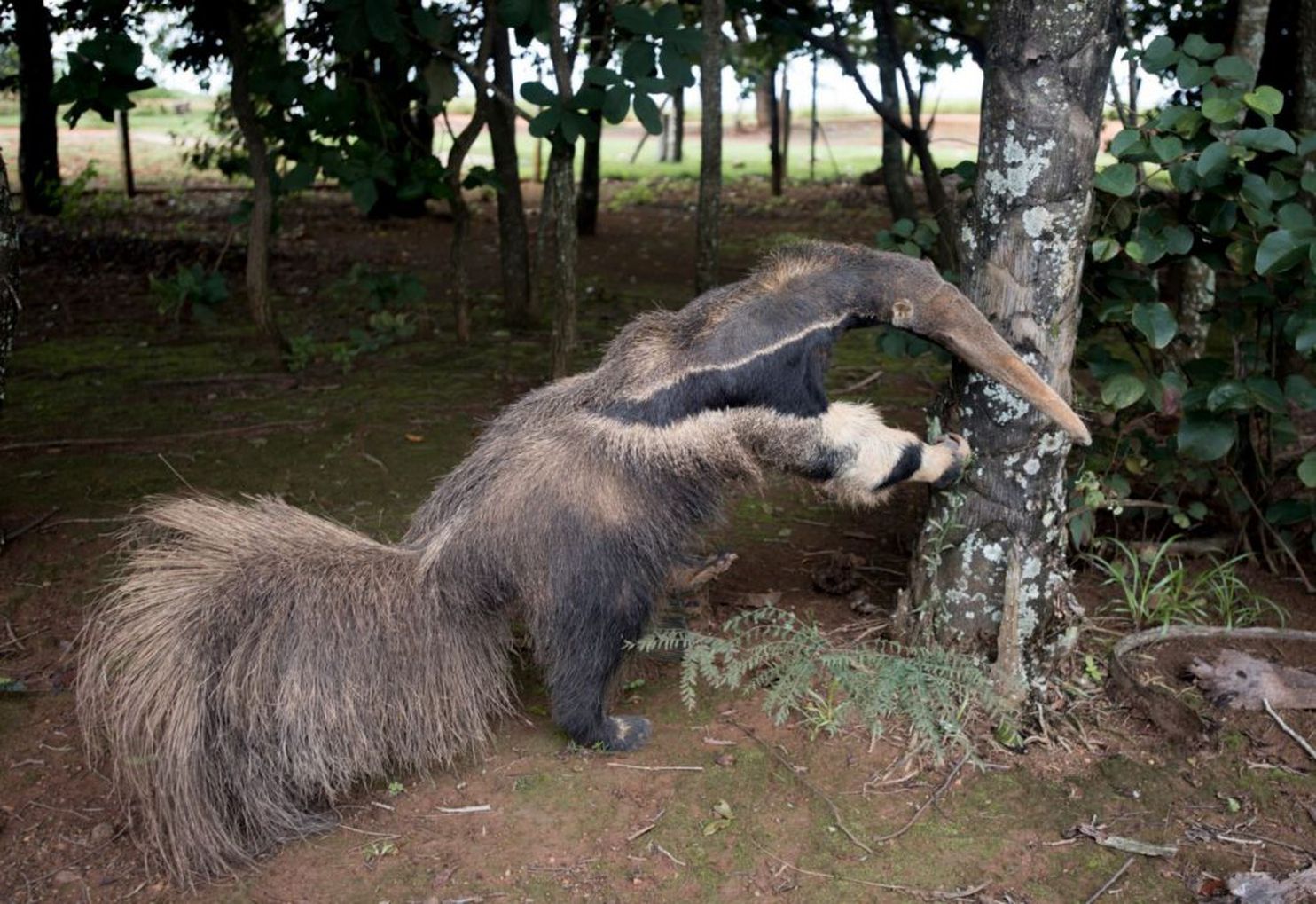 A stuffed anteater on display at the visitor center at the Emas National Park in Brazil. (British Natural History Museum)

And the critics had a real, undoctored photo to back up their claim about the taxidermied insectivorous mammal, the natural history museum said in a news release.

The same stuffed animal was on display at the visitor’s center at one of the entrances to Emas National Park in Brazil.

That was, coincidentally, the same park where “The Night Raider” was taken. And the anteater in both pictures is in roughly the same pose, a telltale sign that it is not, technically, alive.

When questioned, Cabral denied that he had swiped the stuffed anteater from the display and plopped it against a glowing termite mound in the middle of the night.

So the museum launched an investigation.

“The rules clearly state that ‘entries must not deceive the viewer or attempt to misrepresent the reality of nature’,” the museum’s release said. Stuffed anteaters are out.

The museum assembled a five-member team of scientists to compare the photos: Two mammal experts, a South American mammals expert, an expert anteater researcher and a taxidermy expert.

The scientists examined the photos independently, but came to the same conclusion: “There are elements in overall posture, morphology, the position of raised tufts of fur and in the patterning on the neck and the top of the head that are too similar for the images to depict two different animals,” the museum said.

The museum also found some of Cabral’s answers to inquiries about the photo fishy. It’s not unusual for wildlife photographers to snap dozens or hundreds of photos of a subject to capture a single usable image. But Cabral had snapped just one perfect, prizewinning photo. There was no pictures of the suspect anteater in another pose.

“Mr. Cabral did provide an explanation as to why he had no other images of the anteater,” the museum said in its news release. “He also provided a witness who claims he saw the live anteater. Mr. Cabral strongly denies that the anteater in the image is a taxidermy specimen.”

But the museum felt differently, and Cabral was disqualified. His image was removed from the exhibition and the tour, and he can never enter the competition again.

It was the second time in eight years the Natural History Museum has determined a prizewinning photo was too good to be true.

In 2000, José Luis Rodriguez said he had spent months patiently tracking a pack of Iberian wolves to capture a dramatic image of one jumping over a farmer’s fence to hunt livestock — and winning the museum’s Photographer of the Year award.

But judges later found that he had hired the wolf from a Madrid wildlife park, in violation of the contest rules prohibiting animal models, according to the Guardian.

Now, he and Cabral are on the same banned list.

Cabral is a Brazil-based photographer who specializes in mostly panoramic landscape photo and videos, according to his website.

He’s been awarded more than a dozen awards, according to the site, which touts his “well-deserved reputation for his prizewinning work, which has been published in a variety of travel and tourism magazines.”

His site makes no mention of the British Natural History Museum’s award, or the controversy surrounding it.

But his disqualification was a loss for all the other photographers in the category, the museum said.

“A new category winner cannot be awarded because judging throughout the competition is blind — photographer’s names are not revealed. As the photographers are now known, it would be impossible for judges to make an objective choice.”

This article was originally published by The Washington Post.