ANCIENT tombs predating the Egyptian pyramids in Giza have revealed a time of prehistoric horror and cannibalism in the Stone Age, archaeologists have claimed.

Pyramid-like structures hidden across north-central Poland have stunned archaeologists with evidence of bloodcurdling neolithic rituals. These so-called “Polish pyramids” in the Kuyavian-Pomeranian region are believed to predate the Great Pyramids of Giza by thousands of years. Archaeologists estimate the tombs were built between the 4th and 3rd millennium BC, making them at the very least a thousand years older than the Pyramid of Cheops. This was the time of the Stone Age, or the neolithic, when well-defined cultures were emerging across Ancient Poland.

The unusual stone tombs, much like their Egyptian counterparts, were fashioned from great big slabs of stone.

But the comparisons end there because the Polish pyramids were neither as grand and were built flat across the land.

The tombs are triangular in shape and extend in one direction for quite a distance before tapering off.

The structures are slightly raised above the ground and their burial chambers are set into the soil with entrances to the outside world. 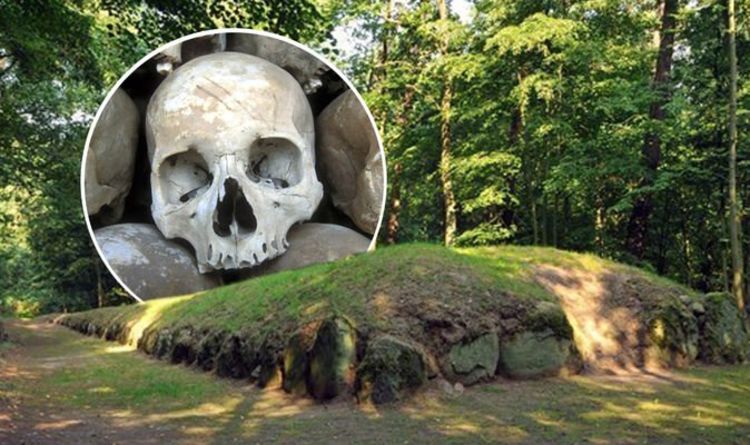 Archaeologists who examined these entrances were stunned to discovered the remains of gnawed on human bones.

And a few more clues from the past reveal the unfortunate denizens were likely eaten by whoever killed them.

An information plaque from a historical site in the village of Wietrzychowice reads: “About 50cm above the central grave another interesting cavity was discovered. It turned out, it was a dugout earthwork for a mass grave.

“The exact number of people buried there could not have been determined. The discovered bones could have blonde to two to nine individuals.

“What is surprising, is one part of the bones was likely burned and intentionally broken, perhaps to gain access to the bone marrow.

“Signs suggesting biting or the tearing off of muscles were also observed on two thigh bones.

“All of this could be interpreted as evidence of a cannibal feast or a mass offering towards a deceased.”

The Wietrzychowice site is an archaeological reserve established in an area settled around 5,500 years ago.

Some of the Polish pyramids measure as much as 492ft (150m) in length and the stones used in their construction weigh in at seven to 10 tonnes.

Archaeological evidence shows only men were buried in the stone monolithic tombs and the constructions housed wooden structures for ceremonial rites.

The tombs most likely belonged to important warlords, leaders, priests and other important figureheads.

In one of the tombs, researchers found the remains of a man who underwent trepanation – the process of making a surgical hole in the skull.

The reserve’s website states: “The deceased – a person high up in the tribal hierarchy – was buried in a straightened position at the helm of the tomb.

“Sometimes two to three individuals were buried simultaneously this way.

“Pots and clay spoons, flint relics, arrowheads, hatchets and war axes have survived to our times.

“The amount of effort put into raising these structures is undoubtedly evidence of a strong tribal bond and the social variety or existence of tribal leaders.”

Quick facts about the Egyptian pyramids:

1. Archaeologists have discovered more than 130 pyramids across the sandy landscape of Egypt.

2. The history of Ancient Egypt is divided into the Old Kingdom, Middle Kingdom and New Kingdom eras.

3. The famous Queen Cleopatra was not Egyptian but Greek Macedonian and a descendant of the Ptolemaic dynasty installed during Alexander the Great conquests.

4. There are three chambers in the Great Pyramid, one of which remains unfinished.

5. The Ancient Egyptians invented one of the first forms of writing and a form of paper known as papyrus.

Egypt expert reveals the function of the Great Pyramid

6. The pyramids are precisely aligned with the north.

7. The Great Pyramid of Giza, or the Pyramid of Cheops, is the largest and biggest of the three iconic structures.

8. The privilege of being mummified after death was reserved for the wealthiest members of Egyptian society.

9. The Great Pyramid of Giza stood as the largest structure in the world for more than 3,800 years.

10. Women in Ancient Egypt are understood to have had the same rights as men and could buy and sell property.