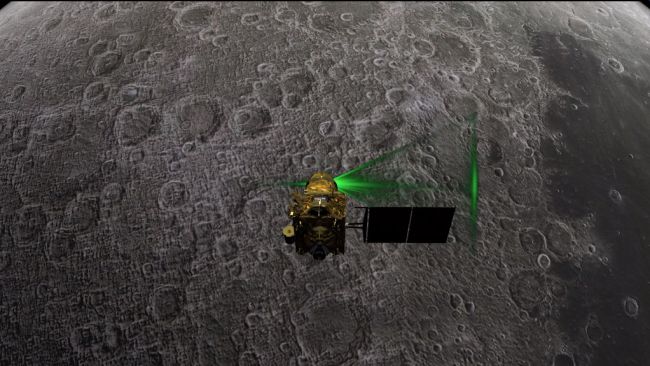 India’s Chandrayaan-2 orbiter circling the moon has spotted the country’s lost Vikram lander on the lunar surface, but there is still no signal from the lander, according to Indian media reports.

K Sivan, chief of the Indian Space Research Organisation, said today (Sept. 8) that the Vikram lander was located by Chandrayaan-2 and efforts to restore contact the probe will continue for at least 14 days, according to a Times of India report.

“We have found the location of Lander Vikram on [the] lunar surface and Orbiter has clicked a thermal image of Lander,” Sivan told the ANI news service in an interview, adding that attempts to communicate with the lander are ongoing.

The Vikram lander went silent Friday (Sept. 6) while attempting a first-ever landing near the moon’s south pole. ISRO lost contact with Vikram when the lander was just 1.2 miles (2 kilometers) above the lunar surface, raising fears that it may have crashed on the moon. The Vikram lander is India’s first moon lander, and is carrying the country’s first lunar rover, called Pragyan.

ISRO officials have not yet released the Chandrayaan-2 image of Vikram on the lunar surface or described the potential condition of the lander. But they have said that despite the lander’s presumed failed moon landing, the craft has already demonstrated key technologies for future missions.

“The Vikram Lander followed the planned descent trajectory from its orbit of 35 km (22 miles) to just below 2 km above the surface,” ISRO officials wrote in an update Saturday (Sept. 7). “All the systems and sensors of the Lander functioned excellently until this point and proved many new technologies such as variable thrust propulsion technology used in the Lander.”

As ISRO tries to regain contact with the Vikram moon lander, the Chandrayaan-2 spacecraft is doing well in lunar orbit, the space agency said. In fact, the orbiter could last well beyond its planned one-year mission.

“The Orbiter camera is the highest resolution camera (0.3m) in any lunar mission so far and shall provide high resolution images which will be immensely useful to the global scientific community,” ISRO officials said in the Sept. 7 statement. “The precise launch and mission management has ensured a long life of almost 7 years instead of the planned one year.”

The Indian Space Research Organisation’s Chandrayaan-2 moon orbiter is shown studying the lunar surface from above in this still image from a video animation.

Chandrayaan-2 is India’s second mission to the moon after the Chandrayaan-1 mission of 2008 and 2009. An instrument on that first mission discovered the spectral signature for water across wide swaths of the moon, with big concentrations at the lunar poles, where permanently shadowed craters allow water ice to stay frozen.

The Chandrayaan-2 Orbiter aims to pick up where its predecessor left off.

“This was a unique mission which aimed at studying not just one area of the Moon but all the areas combining the exosphere, the surface as well as the sub-surface of the moon in a single mission,” ISRO officials said in the update. “The Orbiter has already been placed in its intended orbit around the Moon and shall enrich our understanding of the moon’s evolution and mapping of the minerals and water molecules in the Polar Regions, using its eight state-of-the-art scientific instruments.”