NASA’s Opportunity rover on Mars has lost touch with its handlers back on Earth, probably due to a low-power condition brought on by a chokingly thick dust storm. The storm is covering an area of 14 million square miles, or a quarter of the Red Planet, NASA said today in a mission update.

The solar-powered rover has been in operation for nearly 15 years — but if its batteries dip below 24 volts of electrical charge, it’s programmed to put nearly all its systems into sleep mode and wait until the batteries are sufficiently charged up. NASA’s other active Mars rover, Curiosity, is better able to cope with the darkening storm because its power comes from a plutonium-fueled generator. 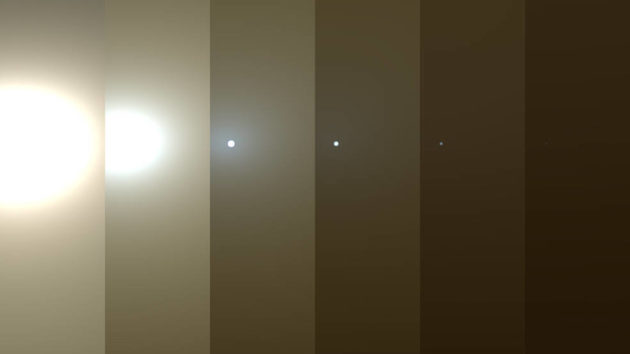 This series of images shows simulated views of a darkening Martian sky blotting out the sun from the Opportunity rover’s point of view, with the right side simulating Opportunity’s current view in the current dust storm. (NASA / JPL-Caltech / TAMU)