The Moon offers some of the best impact records of our Solar System, with very well preserved craters that allow us to study the beginnings of the formation of our system.
And now, a new study just published in the journal Geophysical Research Letters by scientists at Baylor University in Texas has revealed a gigantic structure hidden beneath the lunar surface.

The Aitken Basin region at the South Pole of the Moon has been investigated by several agencies, including the target of Chinese settler Chang'e-4. Now this area has become even more interesting.

Scientists have discovered a structure that stretches for about 300 kilometers and weighs 2.18 billion pounds, hidden beneath the lunar surface. According to measurements, the large metal mass may extend about 1 kilometer deep

"Imagine taking a big pile of metal 5 times bigger than the big island of Hawaii and bury it underground. That's the unexpected amount of mass we've detected, "said Peter B. James, lead author of the study in a statement.
The discovery was made possible by NASA's Grail project, which detects subtle changes in the gravitational field of the Moon. In this way it is possible to study the internal composition of our natural satellite. 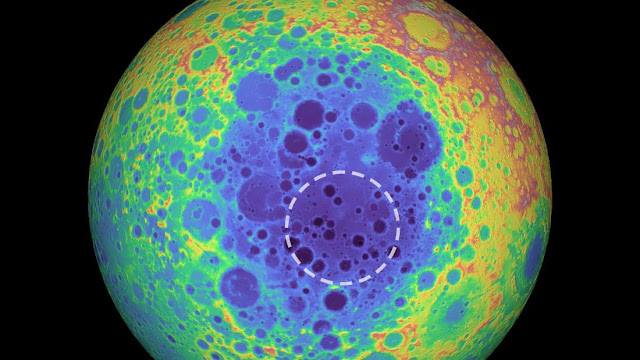 Graph shows the topography of the Hidden Side of the Moon.
Warm colors indicate higher places, while cool colors indicate lower regions.
The dotted circle shows the region where the anomaly was found.
Credits: NASA / GSFC / University of Arizona

"When we combine this with information from the topography of the Lunar Reconnaissance Orbiter probe, we discover the large unexpected amount of mass under the south pole in Aitken basin. One of the explanations for this extra mass is that the asteroid metal that created this crater is still deposited in the lunar mantle. "

The team made computer simulations to explain the anomaly and discovered that it may have been created by an asteroid about 4 billion years ago.

Another explanation focuses on the solidification of the Moon, suggesting that the concentration of elements may have formed as the Moon's magma cools and stabilizes.
The interest in Aitken Basin by various space agencies is due to its very special characteristics, which allows us to understand the risks and results of asteroid impacts, as well as the internal composition of the Moon, revealing its history. Knowing the past allows us to have a basis for what can happen in the future.