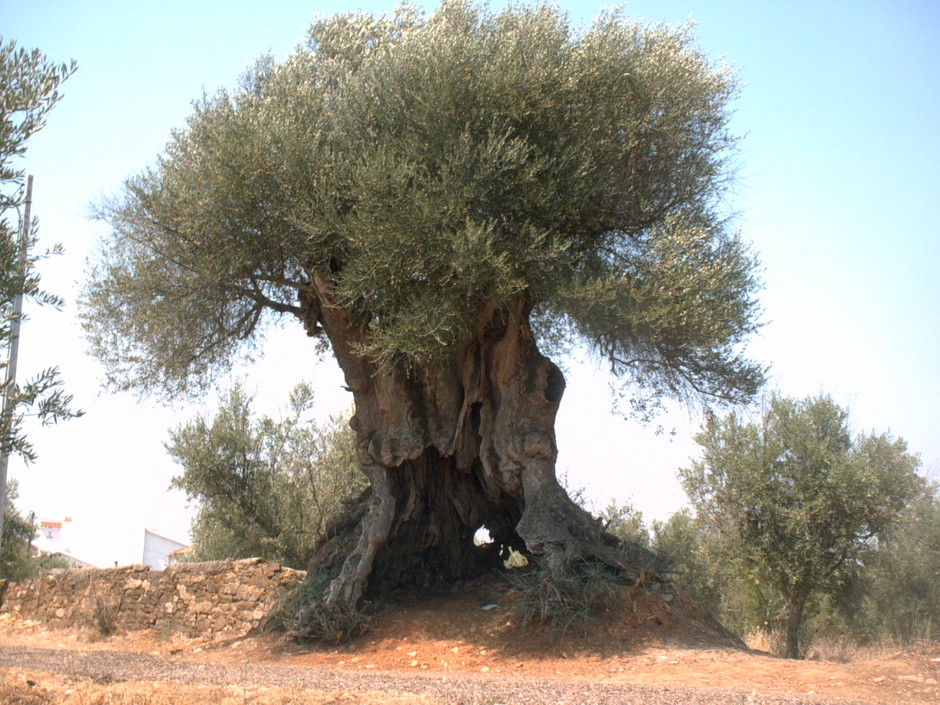 The construction of the Alqueva dam opened a unique opportunity for hundreds of trees to be felled and to test a dating method for the ancient olive trees.

A mixture of respect and perplexity are inevitable when you observe one of the oldest living beings in Portugal. It was recently dated as having the astonishing age of 3350 years, as you can read on the online page of the Institute for Conservation of Nature and Forests. It is an olive tree. Its shadow certainly welcomed Celts, Iberians, Lusitanians, Celtiberians, conios, Romans, Visigoths, Alans or Arabs who fed on the olives it produced. It is contemporary with Pharaoh Ramesses II and Moses (1250 BC).

He is still standing and producing olives in the parish of Mouriscas, Abrantes, revealing a vegetative state that allows him to add a few centuries to his so long existence if, however, man's actions do not reduce wood.

The date was scientifically proven in 2016 by Prof. José Penetra Louzada, professor at the University of Trás-os-Montes and Alto Douro (UTAD), who discovered the only method available to date old trees when their interior is hollow, as it is the case of millennial olive trees.

Since 2008, the year in which the patent was registered, UTAD "has already dated more than a hundred millennia old olive trees", he told the PUBLIC José Louzada. Among the examples observed, is the "Mouriscas tree that is among the oldest in the world", stresses the teacher. Prior to this copy, it was first in the Portuguese list "another olive tree in Santa Iria da Azoia, 2850 years old, which was in danger of being knocked down to extend a roundabout", he observes. The population moved to be dated and today the community is proud of its tree, which is no longer seen as a "hitch". There is no shortage of signs to mark the place to visitors.

The work on the Alqueva dam and the construction of motorways in the Alentejo was decisive for researching the new method of dating, stressing the need to "take down many hundreds of trees that were available for the study, for more than a decade of work. "

The two methods of dating until then were based on the identification and counting of the rings or the radiocarbon analysis of the wood formed in the first years of life. However, the observation involved damaging part of the logs. And none of them worked with the ancient olive trees because they were hollow. Louzada has developed a mathematical formula for its dating that does not damage the species and is based on growth patterns through measurements of the diameter, height and perimeter of the olive trees.

To be sure that the standard method for olive trees was correct, they requested the collaboration of the Technological and Nuclear Institute to date carbon 14, and it was found that "it coincided with 100%," the expert stressed.

The challenge to obtain a new method that suited the olive trees was launched by Soares dos Reis, owner of a company selling millenary trees. At one time, when he intended to export copies abroad, he was confronted with the buyer's requirement for a tree age certificate issued by a credible and independent body.

"All the research, including the supply of copies for study, registration of the patent, everything was paid by my company," he told Soares dos Reis. The patent for this method is registered in the proportion of 50% for UTAD and 50% in the personal name of the entrepreneur.

Soares dos Reis says that he is connected to the transplanting of trees, especially olive trees, for more than 15 years. And it was to distinguish itself from the competition in this trade that funded the research of a new method of dating. "So I add a certificate of age to the olive tree sold to the client through a patented method that has only a margin of error of 2%," says Soares dos Reis, stressing the importance of building the Alqueva dam in this process and other public works. "They led to the uprooting of millions of olive trees that until that date were unthinkable to be removed," says the businessman, stressing that in this issue "were thousands of hundred-year-old and millenary trees whose destination would be destruction for firewood." restoration for sale as decorative trees of public and private gardens, wineries, wineries, golf courses, hotels "allowed thousands of olive trees to be saved." In relation to millenary trees he says he has negotiated "only a few dozen" to Spain, France and Dubai, essentially.

In fact, almost all of the millenary trees "are zambujeiros, also known as brave olive trees that have been grafted" to produce a larger fruit and thus obtain more volume of olive oil, says José Louzada, noting the "virtually infinite regeneration capacity" of this species.

It is obvious that the initial cells of an ancient olive tree "are not there, they have died many centuries ago, but there was a regeneration and in this way lives almost perpetually," he explains.

The olive tree of Mouriscas is originally a zambujeiro that was grafted and produces two qualities of olives. When it was suspected that it could be the oldest in Portugal, a group of citizens of this parish asked that the tree be dated and certified. The UTAD researcher, together with the company Oliveiras Milenares, collected the elements and was confirmed to be of the age of 3350 years. The certificate was awarded in September 2016.